Many economists and pundits have predicted an economic collapse in the “not to distant” future. Some predict a deflationary collapse, while others predict an inflationary one. The common thread among these people is the belief that a collapse in imminent. We can use Austrian analysis and determine just who is correct.

Since 2008, the Federal Reserve and other central banks have been on an unprecedented money “printing” binge. Whether you call it “QE”, “Abenomics” or plain old money inflation, the fact remains that central banks around the world have been devaluing their respective currencies like never before.
The chart below easily shows the amount of money that has been added to base supply of money since the 2008 crisis.

Most of this new money hasn’t found it’s way into the general economy, yet. For the most part, it has stayed in the banking and financial sectors, those closest to the source, in the form of equities (stocks) and “too big to fail” bank reserves. The Federal Reserve is paying interest on those reserves and in turn, the banking sector has heavily invested in government bonds and equities. This policy removes any need to take on risk by the banks. It’s much less risky to earn a few basis points of interest on billions of dollars in reserves than loan out money to any possibly risky borrower. Although this has blown up a stock market bubble, it has squelched any doomsday scenario of runaway price inflation in the general economy and adds deflationary pressure. What price increases consumers experience are in the prices of highly demanded goods such as, rents, food, energy and so on. These are goods and services that everyone in the economy must purchase in order to survive and function.

The next chart shows the velocity of money (M2). That is, the amount of money that is circulating in the economy at any given time. 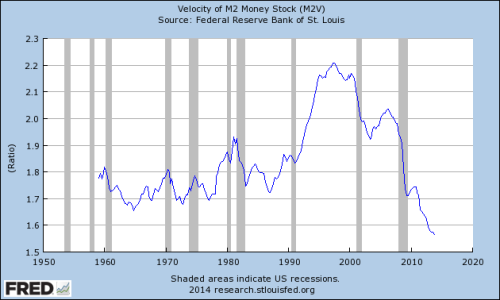 It is easy to see since 2009 and the onset of the Fed’s QE policy, the velocity of money that is actually circulating in the economy is at a near 50 year low. This is a clear sign that economic activity has been slowing, not increasing. The shaded areas indicate recessionary periods. It is common that investors and consumers hold on to cash during times of recession. Since the “Great Recession” has ended we can see that the velocity of money continues to fall. This puts tremendous deflationary pressure on the economy. It is also easy to see although the supply (M1) has steadily increased, the velocity (M2) is falling. Activity is stagnating, investment isn’t really happening and the economy is in a classic bubble regardless of what the government or CNBC may tell you.

Another problem adding to the loss of money in the economy is our ever increasing trade deficit. Far more cash is leaving than is coming in. This phenomenon has been been going on since the mid 1970s but really took off during the 1990s. This is the affect of high imports and low exports. Our trade deficit is adding huge amounts of deflationary pressure on to the economy. The Fed’s response has been to print larger and larger amounts of money to keep up with this continual outflow of cash. As the Fed creates new money more cash is flowing out of the country and into foreign bank reserves. There are far more US dollars overseas than is within our borders. Much of it is in the form of US bonds. Wherein, where we get the expression, “We import goods and export inflation” or as Bill Simon once put it, “It may be our dollar but it’s your problem”. 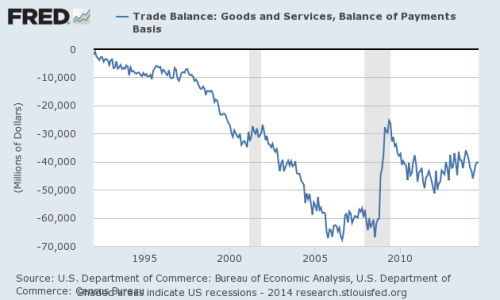 Let us not forget spending. Relying on the Law of Supply and Demand, we understand that as consumers spend they drive up the cost of goods. The more a good is demanded, this increases it’s price. Consumer spending is one of the biggest drivers of price inflation. But here’s the rub, consumers aren’t spending. They don’t have the money to spend. Unemployment is at new highs and those with jobs are trying to pay off the debts they accumulated during the pre-2008 crash. Many have fallen into bankruptcy or have had to take lower paying part time employment as the labor market restructures from a full time economy into an Obamacare driven part time economy. The two-edged sword of the Fed’s inflationary policy has wiped out the middle class while trying to prop up a stock market that isn’t investing in domestic production.

How It Unfolds, Deflation Then Inflation

As all bubbles do, they pop. This debt bubble we find ourselves in now is no exception. This Mother of All Bubbles (MOAB) will initiate as a deflationary crisis as panic causes money and credit to tighten. Deleveraging, the clearing of debt, is common during a crisis. Credit will not be easy to get and debts will be harder to repay. The stock market will lose it’s phoney inflationary value quickly as investors liquify their portfolios. In a deflationary economy cash rules the day, not credit. Money will be hard to come by. Those with savings and cash will do well for a while. This is the correction. It would be over quickly if left alone to reallocate resources correctly. The dust settles and the economy has been realigned into something more sustainable.  That is until the Fed steps in with more inflationary intervention.

To no one’s surprise the government and Fed will step in to “rescue” the economy again. Only this time the amount of monetary inflation required will have to be something unprecedented. Interest rate manipulation will be limited as they are already near zero, so the Fed will turn to it’s only tool and pull out the inflationary hammer. But printing the mega amount of money needed to stop a deflationary scenario will only lead to a currency collapse. Complicating matters, the big banks will begin to release those huge reserves they’ve had on their balance sheets for years. They too will be cash strapped. The foreign reserves that once sat idly overseas will come flooding back as foreigners attempt to divest themselves in a currency that is rapidly sinking in value. Hard assets, property and businesses will be bought up by foreigners at a rate never seen before. Americans will be pressed in to selling anything and everything they have in an attempt to maintain cash reserves. Gold and silver will be desired and cash will be exposed as the useless paper it is. After the dust settles, we will find ourselves no longer the masters of our own destiny. Businesses and assets will be held by people other than Americans. We will become foreigners in our own country.

This is why Austrian economists, as well as a few Founding Fathers have warned that the single biggest threat to our security is our national debt. Even the Pentagon concedes to that. Debt is a cruel master and makes slaves out of free men. Congress won’t listen and neither will the myriads of cronies and Keynesian economists that have infiltrated the government. The best anyone can do at this point is to be prepared. If you can’t afford to buy precious metals, then purchase those goods that the metals may chase after in the future. Stock up on canned goods, basic necessities, ammunition and medicines. These are always highly demanded goods in a severe economic downturn. You will probably have to rely on the black market. As the majority of people on the planet, we will not be “exceptional”.  Welcome to the developing world.

One thought on “Which One: Inflation or Deflation”