There has never been in the history of this country a time when Americans were dropping dead due to starvation. The only exception would be the Jamestown colony of 1607.  Those that advocate for a socialist solution for the condition of hunger need only to look back through history at this country’s first attempt at communal living. The Jamestown colony was established on the same ideal of  “to each according to his need, from each according to his ability”. Property was to be held in common by the Virginia Company of London at Jamestown. They were told if they did not generate wealth for the company then any support would end. As it turned out more people had needs and very few displayed any ability. Very little farming was done. The ability that the men did display was a futile attempt at panning for gold. Only 38 of the original 144 survived the winter. The colony may well have perished had it not been for the leadership of John Smith. He imposed strict discipline on the colonists. “Work or starve” was his motto, and each colonist was required to spend four hours per day farming.

If you watch TV news or read articles online or in print you would think that things are so bad that people are starving in the streets while capitalists hoard away all the resources. Organizations spring up, almost daily to “combat” hunger in the United States. With a quick search on the web you will find names like, No Kid Hungry, Feeding America, Hunger in Our Schools and even Hunger Free Minnesota (an agricultural state). In 2011, Con Agra Foods funded a study for Feeding America stating that one in five children in America go to bed hungry. The study was based on 2009 Department of Agriculture statistics. The USDA study was focused on the term “food insecurity”. The USDA classifies households as “food insecure” if they report worrying about not having enough money to buy food, if they substitute cheaper foods, skip meals, or eat less for financial reasons. If they do these things frequently, they are classified as “very low food secure.”

Slightly more than 21 percent of households are considered “food insecure”, hence the one in five number. What? You can’t have a T-bone and substitute sirloin? You’re food insecure. Junior wants an ice cream Sunday but gets a Popsicle instead? Food insecure. Junior is going to bed hungry. Poor, poor Junior.

Statistics like those in the USDA report are tossed around frequently to purposely overstate the issue to the public. The reader might have noticed that Con Agra Foods had funded the study. If that smells like cronyism to you, then you would be correct. It is the Agri-Lobby that benefits from tax payer dollars being funneled into government food programs. Every food stamp, Meal on Wheels, school lunch or WIC dollar spent is clear revenue for agri-business. With the help of your favorite Midwestern politician, business is good. Some 985 lobbying agencies and billions of dollars descended on the USDA in 2009 to make sure that their pet projects were protected and well funded. According to OpenSecrets.org, who track lobbying in Washington, Monsanto had spent a total of $8 million in 2009 ($1.53 million in the fourth quarter alone) to keep the bureaucrats and politicians in line. This wasn’t their biggest year either. They “invested” $9 million in 2008.  Monsanto was only one in a sea of 3,225 listed reporting lobbying clients that year who greased the wheels at the USDA. The Department of Agriculture returned the favor and released their “one in five” study.

In 2004, David Brenner, the administrator of the Coalition Provisional Authority, signed Order 81 on “Patent, Industrial Design, Undisclosed Information, Integrated Circuits and Plant Variety.” Order 81 gives full right to American agri-business corporations such as Monsanto to control the future of Iraqi seeds and agriculture, prohibits Iraqi farmers from reusing their traditional seeds and forces them to buy seeds and Agricultural material from U.S. companies.

In Afghanistan, President Bush ordered the over spraying of poppy crops to combat the “war on drugs” by using Monsanto’s herbicide Round Up Ultra. According to the Wall Street Journal Article, “U.S. Defines Its Afghan Strategy”, in March of 2009, where the plan for handling Afghanistan’s illegal opium trade was detailed. Farmers who grow poppies will be offered wheat seeds for free from either Afghan or U.S. officials to start growing wheat instead of poppies. It goes on to state: “If the farmers refuse, U.S. or Afghan personnel will burn their fields, and then again offer them free replacement seeds.” Let’s repeat that for effect — U.S. personnel will burn their fields and then pressure the farmers again. And we wonder why the Afghan people have not yet warmed to our presence in their country.

Of course, the first one’s free. The seeds offered are GMO, hybrid varieties that require future seed purchases, season after season, as hybrid seeds kept from the crop are sterile and will not germinate. The same has been business as usual for U.S. farmers for decades. Imagine what would happen to the world food supply if, for some reason, hybrid seed production were interrupted due to economic turmoil or a global currency collapse. There is only enough hybrid seed for one season of crop production. This is a cash cow for seed producers, but certainly a dangerous state of affairs for the world food supply.

What About the Poor?

The critics say that if the government didn’t have these agencies to help the poor, then people would drop dead from starvation. To answer this claim lets first define the word “poor”.

The U.S. has defined any family of four earning less than $23,050 per year as being below the poverty threshold. If you do the math that’s $11.08 an hour for a 40 hour work week or $88.64 for an eight hour work day. According to the World Bank, the global poverty line is less than $1.25 a day. It revised its number up from $1 a day in 2012. You would have to admit, $1.25 a day is pretty darn poor. Obviously, living standards and price inflation rates vary in accordance to regions, but $11.08 an hour still looks pretty good in comparison. It gives one pause and helps put the plight of the rest of the non-developed world into perspective. The CIA World Factbook puts the United States in the 15 percent range of populations below the poverty threshold. Along with the U.S. are Chile, South Korea, Belgium and Vietnam. Germany fared worse being in the 16 percent range along with Japan. On the far end of the scale countries like Chad, Haiti and Liberia fall in the 80 percent range. The best, Taiwan at one percent.

Poverty is not a new phenomenon to mankind. The majority of human history is full of abject poverty, hunger, tyranny and misery. From Asia to the New World. It wasn’t until the Industrial Revolution took place (approx. 1760 to 1850) that the necessities of life, the quest for food, clothing and shelter, were conquered. It wasn’t until the Industrial Revolution that the concept of poverty entered the American psyche. The middle class emerged during the era where Americans turned from an agricultural based economy to an industrial one. There weren’t any people holding “End Poverty” signs in the streets of American cities until very recently. Why? Because everyone was poor. If you weren’t connected to the aristocracy or government, you were probably poor. Plus, no one turned to the government to relieve their poverty. That was the function of religious institutions, lodges, fraternities, associations and families.

We got here from there, so to speak, by academics being infused with a healthy dose of European socialist thinking. It wasn’t until 1861 that Yale University became the only university to offer a PhD program. Before that, students had to travel to Europe, primarily Germany, to obtain a doctorate degree. It was during this   time that Karl Marx and Frederich Engels and there political ideas were making strong inroads in European academia. This new infusion in economic and philosophical thought made it’s way back to American shores and influenced popular thinking. Later, once doctorate degrees became more common place in American  universities, Marxist, communist and socialistic ideology was widely taught and multiplied rapidly. Capitalism became the new public enemy number one. Marxist exploitation theory became the new norm in the view of the average American and has remained ever since. Those involved in the new Progressive movement of the late 19th and early 20th century saw it as there opportunity to apply these ideas to the role of government. The Progressives and Socialists, aided by big business, reshaped the influence government would have on American life from then on. In an earlier article, “Market Failure or Government Intervention?” we examined how big business used the Progressives to advance regulations and the creation of the vast number of regulatory agencies to stymie competition and create oligarchies. What we call crony-capitalism (corporatism) today has it’s biggest influence during the Progressive Era. 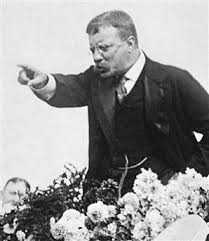 War is Good for Business

With the onset of war during the early 20th century, cronyism became securely entrenched.  The Spanish American War was waged to give corporate America a foothold in a rapidly shrinking world. Manifest Destiny would be extended to foreign shores to “make the world safe for democracy”. So was the public line. Actually, it gave the private interests an easy way to establish themselves in a growing international market. Patriotism morphed into nationalism and the idea of “American Exceptionalism” became born. Early German Marxists were the first to coin the phrase, thinking that somehow, socialism would pass America by. Later, the neo-conservatives, who’s base ideas find their Genesis with Trotsky, would beat the American Exceptionalism drum. To a neo-con, American Exceptionalism means that as Americans we are endowed with special rights and powers that no other nationality has. This “exceptionalism” gives the U.S. government the authority to go throughout the world and instruct other people how to live their lives. It’s nothing more than intervention at it’s ugliest.

It is no surprise that the United States government finds itself in perpetual war. War is good for big business. From the Spanish American War, WWI, WWII, Korea, Vietnam and on and on, corporate America has benefited from lucrative contracts to managed “free” trade agreements. In 2010, Marine General James Cartwright, the Vice-Chair of the military Joint Chiefs of Staff, told the Army Times that the U.S. can expect continuing war “for as far as the eye can see.” Not just the obvious defense contractors benefit from perpetual war, but so too do other corporate interests. Everything from construction contractors, energy companies, resource mining companies, security firms and financial markets benefit when America goes to war.

We went down this long road of corporate cronyism to demonstrate who is behind the curtain in the federal government. When we hear a claim that Americans are going hungry, follow the money. Those that shout for more government intervention only gets more corporate cronyism. The two are like Laurel and Hardy. They are inseparable. When the media runs stories on hunger, poverty, education or just about anything else, you can bet your bottom dollar a private interest will get the benefit and the “victims” get very little. The cold hard truth is, the government cares very little for the common man. He doesn’t pad campaign coffers with all that PAC money. The common man is to be entertained back into submission. Give him a show every couple of years, call it an election. Make him believe that the government is tuned in to his plight. Change the parties around. Nothing will change. It hasn’t changed since the Progressive Era started at the turn of the 20th century and the marriage of business and government began. Why on earth are we supposed to be concerned for children going hungry when, at the same time, Michelle Obama heads up the governments campaign on child obesity?

One thought on “Americans are Starving!”