With the ever growing popularity of Senator Bernie Sanders on the Presidential campaign trail, I thought it would be high time to discuss the concept of the social safety net. Bernie Sanders touts, ad nauseam, the importance of the government to step in and help the poor in our society. Although it may seem altruistic of Sanders and other socialists to insist that government “do something” for the poor, the outcome ends up being quite the opposite. They are downright harmful and are sending this country over a cliff.

President Lyndon Johnson declared war on poverty in America when he signed the Economic Opportunity Act on August 20, 1964, which then created the Office of Economic Opportunity. The OEO gave rise to the Community Action Program, Jobs Corps and VISTA (Volunteers in Service to America). Shortly on their heels the Food Stamp Act, the Elementary and Secondary Education Act and Medicare and Medicaid were enacted. As a matter of fact, there are some 126 agencies, bureaus and offices and 92 federal programs that have sprung up to fight the war on poverty. Since Johnson made his infamous war declaration, Americans have spent over $22 trillion on poverty. That’s right, $22 TRILLION. Adjusted for inflation, that’s more than three times the total spent on all American military wars combined. Let that sink in for a few minutes.

America is actually the Johnny-come-lately to the altruistic welfare party. It began in the mid-late 19th century with Chancellor Otto von Bismarck of Prussia. After he defeated France in 1871, taking his cues from Abraham Lincoln, he unified the several German provinces into one empire. This centralization of power gave him the ability to control both foreign and domestic policy without the concern of another German province interposing. It also created a captive national citizenry. He then created the first welfare state in the modern world which he called the Sozialstaat. Let’s be clear, the Iron Chancellor didn’t create the welfare state out of kind heartiness. He did so to garner the support of the working class away from the up-and-coming socialists. What Bismarck discovered was, as long as the welfare kept being doled out to the masses, he could build a dependence on the state and cement his control.

Otto von Bismarck’s social state gave rise to literally hundreds of bureaus and offices with an intricate maze of regulations and laws that were near impossible to circumvent or even navigate. This latticework of red tape was still in place when Adolf Hitler came to power in 1933 with his National Socialist Workers’ Party or Nationalsozialists. It was relatively simple for the Nazi’s to set up shop in a governmental infrastructure that was already centrally controlled. What the German people thought to be a good deal under the Sozialstaat, turned out to be their worst nightmare only a couple of generations later.

We know through basic economic principles that people make decisions based on their subjective valuations. People act on the incentive that their actions will leave them either better or worse off. This is known as subjective utility. Another key principle of human action is opportunity cost. That is, in our world of limited resources, it describes the value of the best alternative forgone, where a choice has to be made between several mutually exclusive alternatives. The best example would be the choice to go on public assistance (welfare) or take a job. There are certain trade-offs which the individual has to consider, that is the marginal benefits and marginal costs. Simplified, what we are describing is the choice to increase someone’s satisfaction by either taking welfare or working. Of course, the choice an individual would have to make is based on that person’s own subjectivity. For some, the stigma of accepting welfare is too great and they would rather go back to work, even if employment may lower their standard of living. For others, peer pressure or generational welfare might influence whether the individual even considers any stigma at all. Since the 1960s, there have been many generations of families reliant on the welfare state. To them, it’s an ordinary fact of life and a means to increase their marginal utility. 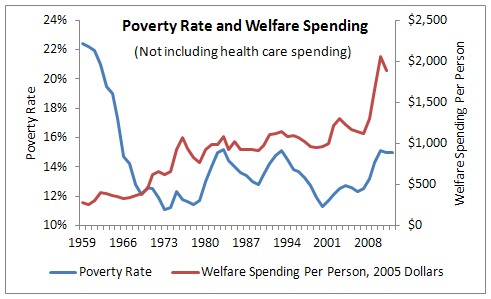 The above chart is a clear illustration of the choices people have made since the war on poverty began. The poverty rate was on a steady decline until shortly after the Economic Opportunity Act was signed into law in 1964. After which, it has moved into a meandering horizontal trend keeping between the 12% to 15% range. Simultaneously, federal spending has done nothing but increase over time. The marginal cost, the cost of increasing one unit of production, has greatly outpaced any marginal benefit, an overall reduction in the poverty rate. In other words, if the goal of the war on poverty is to actually reduce the poverty level, it ain’t working.

What the bureaucrats and apparatchiks haven’t considered is, over time, total welfare payments (housing, power assistance, food stamps, SCHIP, WIC, healthcare, etc.) have set up a competition between the welfare state and labor markets. The benefits a welfare recipient may derive may outpace the benefits someone could expect from gainful employment. As usual, the long-term consequences of a policy pales in comparison to the short term benefits the war on poverty has provided for politicians.

In an Illinois Policy study, the potential sum of welfare benefits provided for a single-parent home can reach $47,894 annually and $41,237 for two-parent homes. Welfare benefits can even be made available for some who earn $78,880 annually. A full-time working single mom earning between $8.25 and $12.00 an hour has the most benefits available to her. This means she has to consider her family’s subjective utility before taking a pay increase. An $18 an hour job would spell a loss of one-third of her family’s total resources. In order to off-set any losses and bring her family to the previous level, she would have to earn $38 an hour or about $76,000 annually.

The incentive to remain in a cycle of welfare dependence is startling when analyzing these figures. But what about the disincentive for “the poor” to maintain a two-parent home? It’s no surprise why minorities have a 72% illegitimate birth rate. It simply pays better.

One of the planks of the Communist Manifesto was a destruction of the family unit by a dependence on the almighty State. The economic concepts and principles we discussed are rudimentary to a learned economist. Concepts of incentives, subjectivity, marginal utility and so on are taught to high school students in an introductory economics course. One would have to consider the incentives the economists have who are employed at the myriad of federal, state and local welfare agencies.

Truth be told, the welfare state has been nothing less than departmental for society as a whole. The moral cost outstrips the financial cost the war on poverty has amassed over the decades. How can you put a monetary value on the security of the family and all of its benefits? Lyndon Johnson’s “The Great Society” has ushered in an era of moral decline that has never been seen before in America. It just furthers the notion of what Murray Rothbard coined decades ago, “Whatever the government tells you, just believe the opposite.”

We can conclude that welfare doesn’t make anyone well, socialism comes at an unbelievable cost and The Great Society was anything but great. Bernie Sanders aspires to the young who think of him as some wise, kindly old truth-teller. But, how wise is it to ignore long-term consequences of well-intentioned ideas? How kind is it to ensnare millions of Americans in a system of dependency? Honestly, how truthful is it to distort the facts to fit one’s own ideology?